The opening chapter of the book of Judges outlines the conquest of Canaan by the people of God. The first verse draws our attention to the book that immediately precedes this one, the book of Joshua. In that book we see God’s commands to Joshua and to His people as a whole, that they are to rely on Him for strength and courage in the face of overwhelming odds. Read about this at https://nathanpatrickroachblog.wordpress.com/2017/03/07/israels-total-failure/

However, at the onset of the book of Judges we see the people of God begin to stray from relying on Him and Him alone for victory and strength. Instead, compromise and half-hearted obedience saturate almost every story and circumstance. Let’s take a look at 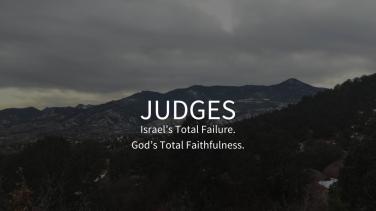 After the death of Joshua, the Israelites asked the Lord, “Who of us is to go up first to fight against the Canaanites?” The Lord answered, “Judah shall go up; I have given the land into their hands.” The men of Judah then said to the Simeonites their fellow Israelites, “Come up with us into the territory allotted to us, to fight against the Canaanites. We in turn will go with you into yours.” So the Simeonites went with them. – Judges 1:1-3

The Israelites are off to a pretty rocky start. We see in these opening verses their half-way obedience. We see quickly that the Israelites were both faithful and flawed. The tribes of Israel inquire of the Lord, asking who is to go up first to fight against the Canaanites. Good start. They know that God is ultimately the One who brings victory so they ask for His guidance. However, after He answers that it should be the tribe of Judah, they don’t fully submit to the Lord. Instead the tribe of Judah immediately asks the tribe of Simeon to help. Instead of relying on God for victory, they rely on military might. The people of God choose to follow conventional wisdom instead of relying on God by faith.

When Judah attacked, the Lord gave the Canaanites and Perizzites into their hands, and they struck down ten thousand men at Bezek. It was there that they found Adoni-Bezek and fought against him, putting to rout the Canaanites and Perizzites. Adoni-Bezek fled, but they chased him and caught him, and cut off his thumbs and big toes. Then Adoni-Bezek said, “Seventy kings with their thumbs and big toes cut off have picked up scraps under my table. Now God has paid me back for what I did to them.” They brought him to Jerusalem,and he died there. – Judges 1:4-7

Despite their half-way obedience, we see that God is graciously with them (His judgment will come when their faithlessness is present in everything they do). The tribes of Judah and Simeon obtain victory. They chase Adoni-Bezek (the Lord of Bezek), catching him and mutilating him. It was a violent cultural practice in that day to cut off the toes and thumbs of prisoners so that they couldn’t fight or wield a sword ever again.

There are two camps in regards to what happens here. Some theologians believe that the Israelites acted rightly in their treatment of this king. They believe that God vindicated their actions. The other camp believes that the Israelites were in the wrong, as they acted in accord with the pagan practice of the day. This second camp also uses the fact that Adoni-Bezek didn’t use the name of Yawheh, but rather just ‘god’ when talking in verse seven as affirmation of their beliefs.

I fall into this second camp. I believe the mutilation of this king was another example of the Israelites acting like the other nations around them, instead of being set apart. However, this is just an opinion.

This is not to say that God never repays the wicked for what they have done. Look for instance at Psalm 64.

Hide me from the secret plots of the wicked, from the throng of evildoers, who whet their tongues like swords, who aim bitter words like arrows, shooting from ambush at the blameless, shooting at him suddenly and without fear. . . But God shoots his arrow at them; they are wounded suddenly. They are brought to ruin, with their own tongues turned against them; all who see them will wag their heads. – Psalm 64:2-4, 7-8

So yes, there is tension between God’s judgment and His people’s part to play in that judgment. However, mutilation does not in my opinion fall in with God’s judgment in this situation.

You may immediately be questioning why then that God led them into war, as that seems to be how the nations outside of the worship of God behave. We will see later in this chapter that this war is not war for war’s sake. It is an issue of idolatry and worship.

The men of Judah attacked Jerusalem also and took it. They put the city to the sword and set it on fire.  After that, Judah went down to fight against the Canaanites living in the hill country, the Negev and the western foothills. They advanced against the Canaanites living in Hebron (formerly called Kiriath Arba) and defeated Sheshai, Ahiman and Talmai. From there they advanced against the people living in Debir (formerly called Kiriath Sepher). – Judges 1:8-11

These final verses that we’re looking at today show that God continued to provide for His people, allowing them to for the time being achieve victory over their enemies.

God gives more grace, even when His people are undeserving.

God gives more grace to you and me, even when we too live according to what’s rational and live with a half-hearted obedience to Him.

Yet may we learn from the mistakes of God’s people in Judges and choose to rely on God in full obedience and faith.

He is worthy of our all.

He is gracious even when we’re both faithful and flawed.

View all posts by nathanpatrickroachblog